Electrical engineers and serious electronic enthusiasts depend on oscilloscopes to diagnose circuit troubles. Let’s look at these three scopes by two different brands and see which one will best help you on your next project. 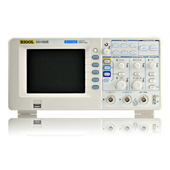 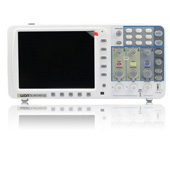 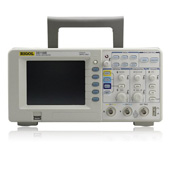 If you want a portable oscilloscope, the SDS7102 model by Owon is the lightest of the three in this review. It weighs less than five pounds, is less than three inches thick, and has a carrying handle on top. It can run off a battery, which is sold separately.

The SDS7102 has two channels and can store up to 10M points for each channel. That’s a lot of data for a scope in this price range. It can save up to fifteen waveforms, and record a waveform and play it back. This ability to store a lot of data is one of the reasons why this is a popular scope.

Another reason that users have liked the SDS7102 is its 8-inch, 800×600, full-color LCD screen. That is a gorgeous display for an oscilloscope. Even better, it has a VGA port so the user can connect it to a larger monitor.

The SDS7102 doesn’t just output video, it can also interface with a computer by way of its USB or LAN interfaces. Some users have reported that the LAN interface is a little harder to set up (although the instructions are available in the help menus on the scope) but it is more stable than the USB connection.

Since this is a digital scope, keep in mind that it will be slower than an analog one. Dave, the reviewer at EEVBlog, noted that the Owon has a problem with artifacts remaining on the screen and the waveforms updated noticeably slower than on the Rigol DS1052E.

The SDS7102 has various trigger options: external, edge, slope, video, and alternate. The vertical resolution with both channels at once is 8-bit. The real-time sample rate is 1GSa/s and the rise time is less than or equal to 3.5 nanoseconds.

Overall, the SDS7102 could be a decent scope for a home user or hobbyist.

More features of the Owon SDS7102

The Rigol DS1102E has 100MHz bandwidth and two channels like the Owon SDS7102.But there are a number of differences between these two oscilloscopes.

The Rigol is larger and heavier at twelve pounds. It does not have an option to run off a battery like the Owon. The screen is smaller at 5.7 inches with a resolution of 320×240. It’s also QVGA, not full-color like the Owon’s screen.It is possible to take and save screenshots, although the process is a bit complicated with a number of steps.

The DS1102E has more trigger modes than the Owon: edge, pulse width, slope, video, pattern, continuous time, and alternate. The real-time sample rate using just one channel is 1GS/s. Its depth of memory is 1 million points and it can store this data on-board, or on a USB pen drive. It can record up to 10 minutes or 50s/division.

No matter what you want to measure, chances are that the DS1102E can do it for you. It has the ability to measure twenty types of waveforms automatically, and that includes ten voltage and twelve time parameters. There are three ways to control the cursor: auto, manual, and tracking.

The Rigol oscilloscopes in general have a reputation for dependability over other brands of less-expensive ones. They’re very popular among electronics enthusiasts, students, and hobbyists.

More features of the Rigol DS1102E

Finally, we have the famous Rigol DS1052E oscilloscope. This is probably one of the best-selling scopes in its class. Again, it’s not a high-end laboratory model, but it’s dependable for what it does.

You may have heard that there is a hack for converting the DS1052E into the DS1102E. Their internals are the same. The DS1052E is limited to 50MHz while the DS1102E has a 100MHz bandwidth. Someone discovered a way to re-program the scope to perform at the higher bandwidth. Unfortunately, the Rigol company released a firmware upgrade that blocked the hack.

But let’s look at the DS1052E and see why it continues to be popular. It’s a digital scope with two analog channels and an external trigger channel. It works with the following triggers: edge, slope, pulse width, video, pattern, continuous time, and alternate. If the user is doing pass/fail tests, the scope has an audible signal.

It measures up to twenty-two types of wave parameters and it has cursor tracking. While measuring, the user can record data on-board or onto a USB device. The DS1052E can be connected to a computer to use the Rigol software called UltraScope.

More features of the Rigol DS1052E

If you want a lightweight, portable scope, the Owon is the smallest and lightest of these three. It does require you to purchase a battery if you want to use it without the power cord.

Besides portability, the Owonhas the best display and the most memory (10M points per channel vs 1M in the Rigols). The display can also be output to a larger screen.

On the other hand, the Rigol scopes have a solid reputation. They have more triggers available and more measurements they can perform. They can also print directly using PictBridge. The main difference between the DS1052E and the DS1102E is their bandwidth: the DS1102E has double what the other model has.

More from my site

This site uses Akismet to reduce spam. Learn how your comment data is processed.